My Grandma had a Micro Wedding

Posted on Thursday, August 6th, 2020, by Brenda Pottinger under Favorites.

My favorite photo wasn’t taken in this decade! 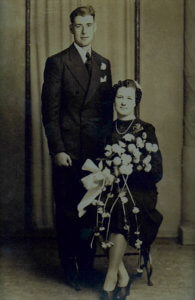 My grandmother had a micro wedding in 1941!

A small brown-toned image of my grandparents on their wedding day reminds me that photography has always been a way to document history. Never having met my grandfather, this image is a timeless treasure. My best penpal was my Grandmother in Wisconsin. In college, I would look forward to calling her and telling her about my adventures in the woods and art classes. As we started our photo business, I would tell her all about the newest ways we were printing photos. She would often chuckle and remind me that though some of the names may have changed, so much of what was old was new again. A famous photographer said to use the phrase “brown-tone”- she reminded me they called it sepia. They also printed on metal too (tintype). We would have a nice chuckle and talk about our love of animals and the weather.

A few years ago I started bringing the framed photo to wedding shows. Documenting love and weddings is an important tradition. No matter what wrong may be going on in the world, it is important to stop and celebrate what is going right. A wedding may look a little different or smaller during a war or a pandemic (micro wedding), but that doesn’t make it any less important. In fact, love (and adorable newborns) reminds us to be thankful for the good in our life right now and to hope for what the better years will bring. A big thank you to my mother, who is my favorite genealogist, for researching and writing about the history behind this very old photo. And to my aunt Kathy for filling in the gaps of the story and digging up the love letter from my grandfather.

This cherished photograph of my in-laws, Norma Clara Hauerwas, born in Oak Creek, WI, in 1922, and Lloyd George Kiekhefer, born in New Berlin, WI, in 1920, was taken on their wedding day.  The couple was married on November 8, 1941, in the Zion Lutheran Church parsonage in South Milwaukee, WI, by the Reverend Otto B. Nommensen. Two family members were witnesses, Waldeman E. Hahn and the bride’s sister, Emma R. Hauerwas.

Both Lloyd and Norma were raised on dairy farms and worked from an early age on the family farms, which included the Great Depression years that lasted from 1929-1933. Norma’s dark dress and shoes and Lloyd’s new suit with a white shirt were appropriate wedding attire for that frugal time period. She marked the momentous occasion with a big spray of flowers with cascading ribbons, a white headpiece, and a single strand of pearls.

Their lifetime love story began unexpectedly in the summer of 1939 while attending the Wisconsin State Fair. Norma was related by marriage to the Giencke Family who happened to sit in the fair stands with Lloyd’s mother’s Barton side of his family! After their welcome introduction, they agreed to write letters to each other when it was time to part. After that fateful meeting, Norma sent Lloyd a birthday card. According to her daughter Kathy, it was signed, “love, Norma.”

Lloyd wrote in his note from October 1, 1939, “Dearest Norma, I am very glad you wrote….Thanks for the compliment on that baby picture of mine….I heard your birthday was past so happy birthday honey…I didn’t forget the State Fair anyway from 5 o’clock on…. Love, Lloyd,” punctuated with x’s after his name.

After Norma graduated from South Milwaukee High School in 1940, their exchanged letters and “Sunday courtship visits,” (a 20 mile, 2 lane road trip) helped their love blossom into an engagement and vows of marriage. Just one month after they said “I do,” Pearl Harbor, Hawaii, was attacked on December 8, 1941, and America was fighting in World War II. Since Lloyd was an only child and America needed dairy farmers, the young couple helped the war effort on their farm.

In spite of all the hardships, Lloyd and Norma worked side by side on their own land, raised four children, and loved each other until they departed this earth.